A Brief History of Fort McClellan 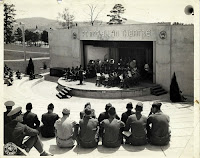 Five years after being renamed Fort McClellan (1929), construction of permanent buildings began. In 1940, the 27th Division (NY NG) arrived. This division was one of the firsts to go into combat in WWII.
In 1941, the fort acquisitioned for more land for training. Fort McClellan trained over 500,000 men during WWII. Many of the units and soldiers received the highest honors and decoration during WWII. The land that they trained on is what we now know as Pelham Range. Training was declared inactive in 1947, and many people left the fort. 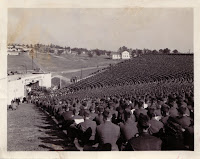 With the training center inactive, the fort created a replacement training center for the Chemical Corps in 1951. However, this school was disestablished in 1972.
Fort McClellan also established the Women’s Army Corps in 1954, which was also disestablished in 1978. Major General Mary E. Clarke was the last director of the Women’s Army Corps, and she later became the first female officer to command a major Army installation.

One year after the Women’s Army Corps was disestablished (1979), the Chemical Corps was reestablished at Fort McClellan. Before the Chemical Corps came back in 1979, the fort established a Military Police School in 1975.
Also activated was the POW Internment camp which lasted from 1943-1946. While this camp was active, it housed approximately 3500 German prisoners at its peak.
To be prepared for the Vietnam War, the fort established an Advanced Individual Training Infantry Brigade in 1966, and was later renamed as U.S. Army School/Training Center and Fort McClellan.
When the fort was closed in 1999, all of its schools scattered across the U.S. The Chemical School, Military Police School, and the Training Brigade relocated to Fort Leonardwood, Missouri. 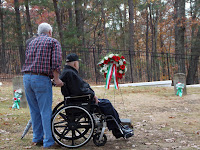 Fort McClellan’s German-Italian POW Cemetery was placed on the Alabama State Register of Historic Cemeteries last year (2015). Many people were brought to Fort McClellan to be buried, but only 4 buried in the cemetery actually died in Fort McClellan. Those 4 people are Fritz Clemens, Josef Kohl, Karl Klaus, and Willi Weachter. Every 3rd Sunday in November there is an annual memorial service. The service is planned and carried out by local citizens.