November Things to Do

As fast as this year has gone it is wild to think that November will be here in a few short days. Now that all of the Halloween candy at Wal-Mart is 50% off, turkeys and stuffing will take their place. As the somewhat cooler weather surrounds us, events in Calhoun County will erupt.

Are you the "Dancing Queen?" November 2nd, Oxford Performing Arts Center will host an ABBA tribute band, which is sure to get you on your feet!

Saturday, November 3rd, before the Gamecocks take on UT Martin and the Southerners reunite, check out the Food Truck Roundup on the Square and let your inner foodie try new things!

If sports and food aren't for you, but you love outdoor recreation, check out Little River Canyon's CanyonFest on November 3rd, primetime for the color changing foliage.

Saturday, November 10th the Fall Art in the Park Festival will be held at Choccolocco Park. Hosted by Artworks Alliance, this festival will host various areas of the arts including ceramics, glass (stained and blown), wood, metalwork, and so much more! Not only is this a great opportunity to educate the family, but a perfect place to start holiday shopping for your loved ones! Gates open at 10 A.M and the festival lasts until 4 P.M.

Sunday, November 11th the Atlanta Pops Orchestra, along with a regular guest of the Atlanta Braves Timothy Miller, will take the stage at the Oxford Performing Arts Center! This night is dedicated to honoring veterans of all branches. Tickets are available for purchase at www.oxfordpac.org/events . Come and enjoy a night filled with beautiful voices and patriotic reason!

If you love arts, community theatre and kids, mark your calendar for Willy Wonka Jr. at the Anniston Performing Arts Center on November 17th & 18th, presented by CASTKidz!

Many don't know that Calhoun County is also home to a German Italian POW Cemetery, and each November on German Memorial Day, there is a wreath laying and presenting of the colors alongside German and Italian delegation from Redstone. 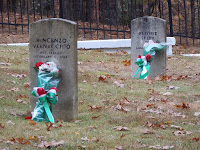 Friday, November 30th at the Oxford Performing Arts Center Aaron Tippin will be celebrating twenty-five years in the music industry. Tippin first signed with RCA in Nashville, TN in the 90’s. Tippin’s acoustic performance starts at 7:30 P.M. sharp. Tickets are available at www.oxfordpac.org/events and start at $19.

Don’t wait till the last minute to find things to do on the weekend, make plans in advance and bring friends! Spend the remaining weeks of 2018 making memories that you’ll never forget! There are many family friendly events around Calhoun County this November!
Posted by Unknown at 12:32 PM No comments: 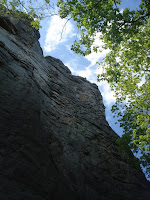 If you have ever been one to explore the outdoors, I highly recommend opting outside in the next few weeks. With the weather finally cooling off, the bugs and other pests are far and few between, making for a more enjoyable hike or nature walk. A light jacket is just enough protection against the elements in these conditions.

As Calhoun County sits nestled in foothills of the Appalachian Mountain Range there truly are natural attractions everywhere. The trees go through the seasonal change and the rolling mountains will turn to a sea of maroon and gold. It is not something you want to miss. Some of the top spots to witness this authentic phenomenon are within driving distance of Calhoun County.

Cheaha State Park is an obvious option, and as the highest point in Alabama, there is a guarantee for fantastic views. Cheaha offers a variety of outdoor activities such as hiking, golfing, fishing, zip lines, and much more! If you want a weekend getaway (kids included or excluded), Cheaha also has various deals on cabins or rooms at the hotel.

Cherokee Rock Village is located in Leesburg, AL. A day spent here can result in hiking trails, bird watching, geocaching, rock climbing, and additional activities. Cherokee Rock Village has options for visitors of all ages to go explore the area, including finding the Natural Stone Arch, which can put a competitive edge to a hike. Views from the top are not like any other, with the main overlook offering a view of the flat lands and connecting lakes. Primitive camping is also an option to endure the wilderness.

If you are interested in a less trafficked area Duggar Mountain Wilderness Area is a prospective spot. This wilderness spot became a part of the National Wilderness Preservation System in December of 1999. The boundaries cover more than 9,000 acres and include a large portion of the Pinhoti Trail. Most of the trails are covered by the forest treetops, so the colors of fall are great in these conditions!

Exploring the fall foliage is a fantastic way to spend quality time and a budget friendly option too! With many levels of beginner trails in the immediate area, the possibilities are endless. No spot is the same, and the views will stand out. Maybe the Christmas card can have a natural edge to it!
Posted by Unknown at 3:00 PM No comments: 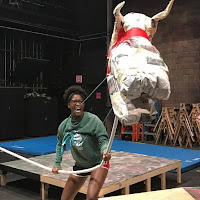 This production features heavy technical elements including advanced puppetry, lighting, projections, original music, detailed costumes, videography, and more. Some of the cast favorites include a throne made of human bones and a pair of flailing human arms used as weapons. Set in the 1990’s, She Kills Monsters is a comedic romp into the world of fantasy role-playing games. She Kills Monsters tells the story of Agnes Evans as she leaves her childhood home in Ohio following the death of her teenage sister, Tilly. However, when Agnes finds Tilly’s Dungeons & Dragons notebook, she stumbles into a journey of discovery and action-packed adventure in the imaginary world that was Tilly’s refuge.
This truly is a show for young adults, college students, and adults alike. According to the team, She Kills Monsters encourages people to “accept weirdos, love weirdos, and let them become a part of the family.” The female driven show speaks to and addresses themes such as bullying, and LGBT advocacy, all while keeping audiences on the edge of the seat as they witness epic, Lord of the Rings style fighting. 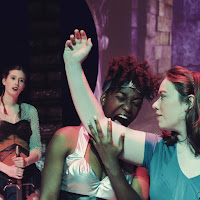 The cast includes Allison Lawley, Chloe Barnes, Christian Watts, Benjamin Marazzi, Anika Corsi, Tiffany Jenkins, Jessika Holmes, Abbie Beatty, Ashe Fadely, Jaden Vaughn, Jesse Curvin, and Kevin Jannot.
“This is the biggest most complicated show we have ever done by far here at JSU … ever, and that’s including over 50 years of theatre.” Dr. Boynton exclaimed during in the interview. She Kills Monsters takes the stage on Friday, October 26th at 7:30 PM and runs through Monday, October 29th. Shows on Friday, October 26th , Saturday, October 27th , and Monday, October 29th are at 7:30 PM, while the show on Sunday, October 28 th is at 2:30 PM. Tickets are available at www.jsu.edu/drama/ or in the box office prior to the show. She Kills Monsters is appropriate for those ages 15+ and includes some adult language, violence, and of course, monsters.
Posted by Unknown at 9:00 AM No comments:

Earlier in the week I had the opportunity to observe and interview some of the whimsical individuals involved with CAST’s Hello Dolly! Hello Dolly! is a classical musical that hit Broadway in 1964, revived five times between 1978-2017.
Dolly, the recently widowed professional matchmaker has arrived in New York City. The hustle and bustle of the 20th century era won’t stop Dolly from finding a wife for the irritable but wealthy Horace Vandergelder. Dolly soon figures out that this matchmaking client with require help from some other forces. 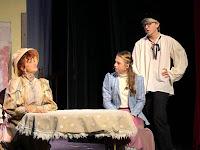 As opening night nears the cast members and crew are in the final steps of preparation for Hello Dolly! Co-directors Scott Whitney and Emily Duncan, alongside the unwearied cast, have truly worked hard to put together a comedic yet warmhearted show. “That’s the cool thing about community theatre it truly is a hodge-podge of everyone coming together.” Stated co-director Scott Whitney. 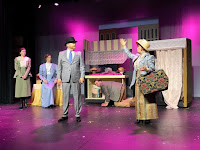 The cast of Hello Dolly! comes from all around the area. The actors and actresses vary in age, size, and profession, but the common factor is the their love for theatre and having a role in the arts of the community. Leila Acheson plays the role of the young Minnie Fay, she described Hello, Dolly! as “ A classical show that had the beauty of the golden age of theatre.”
Many of the team members got involved in theatre through influence of outside sources, or admiring family members as they grew up. Co-director Emily Duncan recalled “At a young age I became obsessed with musicals, I blame it on my mom…Whatever musical was on television at the time, I had to watch it.” 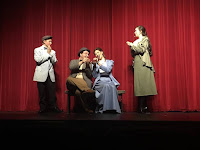 Jonas Abernathy whom plays Barnaby Tucker, first saw the production of Hello, Dolly! on Broadway, “I first saw the character Barnaby, and I was like oh I really wanna be that. I went and tried out … and I ended up getting it.” This show is Abernathy’s first principle role in a show beyond CAST Kidz.
Of the many anticipated musical numbers throughout the show, there were about three repeated favorites including Ribbons Down My Back, Motherhood March, and Dancing. Ellie Kennedy plays the role the court clerk and is a featured dancer in assemble, and when asked about her favorite scene, she exclaimed “I don’t think I have a favorite. I like them all equally.”
Hello, Dolly! will run October 11th , 12th , and 13th at 7:30 pm and October 14th at 2:30 pm for a matinee at the Fort McClellan Theatre. Tickets are available at the door and online at www.castalabama.com.
Posted by Unknown at 12:17 PM No comments: 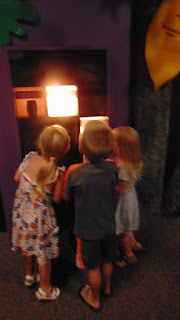 The Anniston Museum of Natural History is more than meets the eye. The museum attracts various crowds throughout the seasons; in the summer, tourists arrive with a curious frame of mind as to what is hidden inside. Fall, spring, and winter attract the public and private schools looking for an educational yet entertaining experience for children.

Renee Lyons and Sarah Burke are a part of the staff at the Anniston Museums & Gardens, both women interned with the museum before they were brought on permanently. In their interview this past week they discussed the most popular exhibits, Ancient Egypt and the Environments of Africa. Both of the collections contain pieces that you will not find anywhere else. As the museum is always welcoming new and returning visitors some advice Lyons and Burke had was to “Look up, look down, look all around and don’t just go around once, go two or three times.”

In the past eleven years the Changing Exhibit Gallery has had five different exhibits including Sue the T-Rex, Reptiles, History of Chocolate, Christmas Village, and Live Salty. In the remaining months of 2018 and in the early months of 2019 the museum is preparing for a new exhibit. While Lyons and Burke could not reveal the topic both are thoroughly excited for the change.

As we enter the fall season, events taking place at the Museum are more thrilling than ever. The month of October alone hosts the Fall Fest, Boo’s Bash (formerly known as Sudsfest), the revealing of the new lobby, and much more! The Anniston Museum of Natural History has Facebook page with more information on each individual event. The museum is open from 10 am – 5 pm Tuesday – Saturday and 1 pm – 5 pm on Sunday. Explore the world as it used to be, what is, and the different exhibits from around the world.

Posted by Unknown at 9:00 AM No comments: